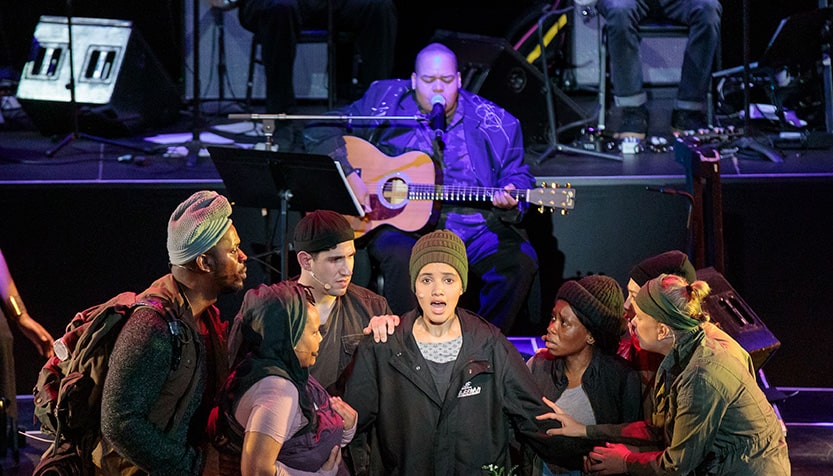 Step Afrika! Premiere and Octavia Butler’s Parable of the Sower are highlights at the Music Center

(NORTH BETHESDA, MD)- This spring, Strathmore will offer an eclectic season of music, dance, and spoken word that includes works grounded in Black music and movement.

In their DMV premiere of Drumfolk, Step Afrika! will explore a form of art that took root and made way for tap, beatboxing, and the African American tradition of stepping. Toshi Reagon and Bernice Johnson Reagon offer an opera adaptation of Afro-futurist author Octavia Butler’s Parable of the Sower. These unique performances will all pay homage to the artistic contributions and resilience of African people in America and beyond.

As the spring flowers continue to bloom, Wynton Marsalis, along with the Jazz at Lincoln Center Orchestra, will pay tribute to the rich history of one of the country’s most unique music genres. Latin music enthusiasts will celebrate Latin Grammy Award Winner Marisa Monte’s newest album release, Portas, her first solo release in a decade.

Strathmore is proud of its Artist in Residence Program which supports artists as they transition to professional careers. As a member of the 2022 cohort, cellist Titilayo “Titi” Ayangade will showcase her talents on Strathmore’s AMP stage.

To close out the season, foodies can engage in all things cuisine with noted cookbook author Yotam Ottolenghi. He’ll share his secrets from the kitchen and offer some inspiration for how to elevate each person’s culinary journey.

Step Afrika!’s newest performance as co-commissioned by Strathmore, Drumfolk, is a celebration of resistance, resilience, and reclamation. It is inspired by The Stono Rebellion of 1739, an uprising initiated by enslaved Africans in South Carolina. From hambone to hip-hop, Drumfolk features an extraordinary ensemble of dancers, drummers, and musicians that will take us from the 17th century to today, revealing the hidden histories and resounding rhythms that transformed America.

Artist In Residence Titilayo “Titi” Ayangade is dedicated to spotlighting musicians of color and giving voice to underrepresented artists and enjoys commissioning new music as well as performing with orchestras and chamber ensembles. Ayangade has a degree in performance from University of Cincinnati and University of Texas at Austin, and is currently pursuing a DMA at the University of Maryland.

Sponsored by Tina and Arthur Lazerow & Bayo and Funke Oyewole

Marisa Monte, a four-time Latin Grammy winner, stormed onto the music scene in her native Brazil in the late 1980s and has remained center stage ever since. Her 2022 US tour celebrates the release of her newest project Portas (Phonomotor/Sony Music). Recorded across multiple continents during the pandemic, the album is Monte’s first solo release in a decade.

An Evening with ANNE LAMOTT

With self-effacing humor, Anne Lamott writes about things that begin with capital letters: Alcoholism, Motherhood, Jesus. In all her novels, Lamott doesn’t try to sugar-coat the sadness, frustration, and disappointment, but tells her stories with honesty, compassion, and a pureness of voice in times of loss.

Lamott is the author of seven novels and she has also written several best-selling nonfiction books including: Operating Instructions and Bird by Bird: Some Instructions on Writing and Life.

AN EVENING WITH DAVID SEDARIS

Sedaris, master of satire and bestselling author of Me Talk Pretty One Day, is one of today’s most observant writers addressing the human condition. In his newest book Calypso, fans will hear these stories live as the Grammy nominee and New York Times best-selling author brings heart and hilarity to the stage.

Iconic jazz trumpeter Wynton Marsalis leads the Jazz at Lincoln Center Orchestra (JLCO) as they perform a vast repertoire ranging from rare historic compositions to Jazz at Lincoln Center‐commissioned works. The JLCO will inspire and uplift with their unique sound, and masterful arrangements of jazz classics by Duke Ellington, Count Basie, Thelonious Monk, Mary Lou Williams, and many others.

An Evening with GEORGE WINSTON

For more than 40 years, pianist George Winston has inspired fans and musicians with his singular solo acoustic piano songs while selling 15 million albums. Winston’s music is evocative, offering fans a chance to take a step back from their busy lives to let their minds adventurously wander. In 2019, he released his 15th solo album, Restless Wind, a portrayal of Winston’s place in a chaotic world.

A documentary with live music, written and directed by Sam Green and Joe Bini

On screen, the quartet’s history at the vanguard of contemporary music unfolds through archival footage and interviews with luminaries like Philip Glass, Terry Riley, Tanya Tagaq, and Steve Reich. On stage, Kronos revisits works from its vast and expansive catalog, performing music by George Crumb, Laurie Anderson, John Zorn, Aleksandra Vrebalov, and many others—while Green narrates in real time.

Generously sponsored in part by Joel and Liz Helke

Adapted from the celebrated work of Octavia Butler, Parable of the Sower is a triumphant, mesmerizing fully-staged opera featuring more than 30 original anthems drawn from 200 years of Black music to recreate Butler’s sci-fi, Afrofuturist masterpiece live on stage. With music and lyrics by Toshi Reagon and Bernice Johnson Reagon, this significant work, that makes it’s DMV debut, gives life to Butler’s acclaimed science fiction novel of the same name.

James Beard Award-winning cookbook author and chef Yotam Ottolenghi shares his passion for everything food as he dishes secrets from the kitchen. Ottolenghi is the author of beloved cookbooks Jerusalem, Ottolenghi Simple, and more. His much-anticipated new book, Ottolenghi Flavor, builds on the vegetable cooking that made his books Plenty and Plenty More bestsellers and teaches ways to create flavor via more than 100 plant-based recipes.

Proof of vaccination or a negative COVID-19 test (PCR), and facemasks are required to attend any performance or event inside any of its buildings.