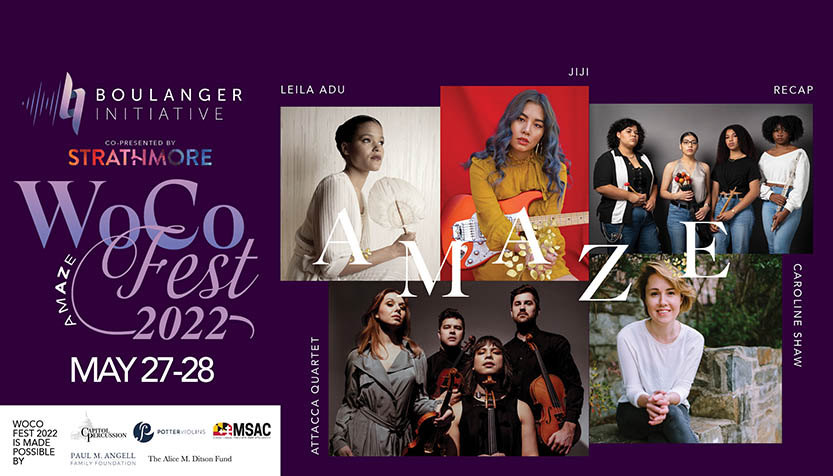 Proof of Vaccine or Covid Test and Masks required. Patrons with full day passes will receive a wrist band after the first check in, for easy access throughout the day 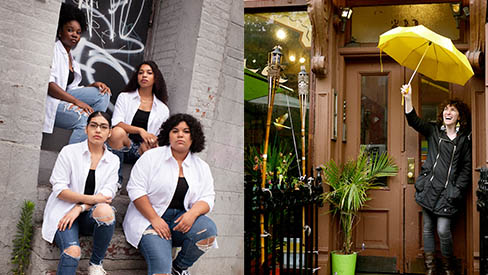 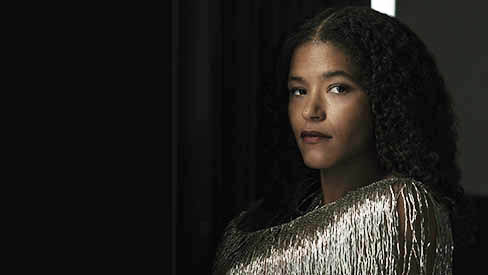 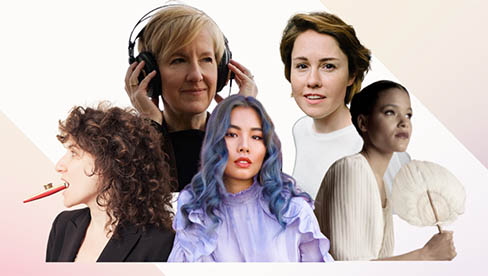 FREE WITH TICKET TO EVENT

Composers discuss projects from their earliest inception to their fullest realization! We’ll talk about inspiration and obstacles, both internal and external, with a focus on what drives us to keep making our music happen and how we get it out there! 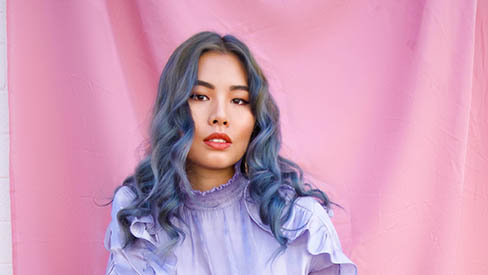 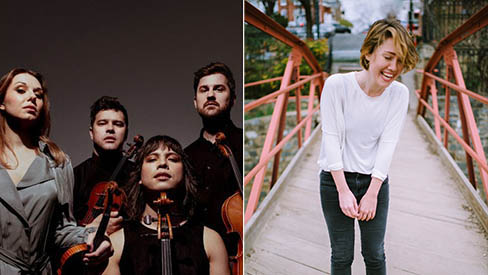 Recap is a percussion quartet from a new generation of musicians dedicated to music reflecting the diverse society we live in today. Arlene Acevedo, Alexis Carter, Tiahna Sterling and Aline Vasquez, four musicians from Rahway, NJ, form Recap through music, friendship and a desire to share their unique story. As recent alumni of Mantra Youth Percussion, the free-tuition teenage ensemble of Mantra Percussion, Inc., the members of Recap worked closely for several years, performing both in their community as well as nationally.

Now a professional ensemble, Recap released their debut album “Count to Five” on Innova Recordings in September 2021 with premiere recordings of music by Angélica Negrón, Allison Loggins-Hull, Ellen Reid, Lesley Flanigan, Mary Kouyoumdjian, and Caroline Shaw. Their album is featured on both NPR's Top 10 Classical Albums of the Year (2021) as well as NPR's Top 100 Songs of the Year for their performance of Lesley Flanigan's "Hedera."

Recap’s next two projects include an evening length commission by NY composer Lainie Fefferman to be premiered in 2023 and a tour to the Kenai Peninsula and Alaskan Beringia regions to perform a new work created through interdisciplinary artistic collaborations with
indigenous artists that address the cultural, economic, and environmental challenges faced by the Alaskan Beringia region while celebrating its incredible cultural and biological diversity and natural beauty.

Lainie Fefferman makes music by putting dots on lines, drawing curves in software, writing code in boxes, and finding new and surprising ways to wiggle her vocal chords. Her most recent commissions for the creation of original works have been from Recap Quartet, Greg Oakes, JACK Quartet, Aaron Larget-Caplan, Ensemble Decipher, Tenth Intervention, Sō Percussion, Make Music New York, Experiments in Opera, ETHEL, Kathleen Supové, TILT Brass, James Moore, Eleonore Oppenheim, and Dither. Her one-woman voice & electronics feminist song performance project "White Fire," an electroacoustic meditation on the heroines of the Hebrew Bible, premiered at Merkin Hall in 2016 and she has been tinkering and touring it internationally ever since. She is a co-founder and director of New Music Gathering, an annual conference/festival hybrid event for the international New Music Community. She had a wonderful time getting her doctorate in composition from Princeton University and is a programming/performing member of Princeton-based laptop ensemble Sideband. She currently teaches and advises a fabulous bunch of music makers as a professor of Music & Technology at Stevens Institute of Technology and recently concluded her time as artist in residence at Nokia Bell Labs. For more info, visit: http://lainiefefferman.com

Composer-performer Leila Adu-Gilmore has firmly carved her name into the space where electropop, avant-classical and singer-songwriter meet. Hailing from New Zealand, Britain and Ghana, performing as solo artist and band leader “Leila Adu” she has performed her original piano songs and improvisations alongside international artists at festivals and venues in the UK, mainland Europe, the US, Russia, Ghana and Asia. She has released five acclaimed albums, including two for Italian National Radio and ‘Dark Joan’ (recorded by Steve Albini); and has performed on BBC’s World Service solo and produced a short-film and documentary soundtrack with screenings on BBC Knowledge TV channel and the NZ Film Festival, as well as performing in Luscious Jackson on ‘Late Night with David Letterman.’

In 2022, Adu-Gilmore received the Charles Ives’ Fellowship from the American Academy of Arts and Letters. She has composed for Bang on a Can, the London Sinfonietta, the Crossing, the Brentano String Quartet, Mivos String Quartet, So Percussion, Gamelan Padhang Moncar, Orchestra Wellington, as well as performing and having compositions performed at Ojai Music Festival, and Magdalena Opera. She received BMus from Victoria University of Wellington, and her doctorate in music composition at Princeton University, and is currently an assistant professor in the music technology program in the music and performing arts professions department at Steinhardt, New York University.

Applauded by the Calgary Herald as “…talented, sensitive…brilliant,” Jiji is an adventurous artist on both acoustic and electric guitar, playing an extensive range of music from traditional and contemporary classical music to free improvisation. Her impeccable musicianship combined with compelling stage presence and fascinating repertoire earned the Korean guitarist First Prize at the 2016 Concert Artists Guild International Competition.

A passionate advocate of new music, Jiji has premiered a duo piece Talking Guitars by renowned composer, Paul Lansky, released on Bridge Records. She has premiered works by numerous emerging composers, including Nina C. Young, Gabriella Smith, Riho Maimets, Krists Auznieks, Gulli Björnsson, Andrew McIntosh, and Farnood HaghaniPour. She also performs her own compositions, incorporating electronic media and acoustic music. Her music is influenced by her regular activities as a DJ, where she highlights the electronic dance styles of happy hardcore and Berlin experimental electronica. As a chamber musician, she performed with members of Eighth Blackbird, Bang on a Can All-Stars, wild Up, and the Aizuri Quartet. Her performances have been featured on PBS, NPR’s From the Top, WHYY-TV, FOX 4-TV, Munchies, The Not So Late Show, and Hong Kong broadcast station RTHK’s The Works. Jiji is currently based in Tempe, Arizona where she holds the post of Assistant Professor of Guitar at Arizona State University. She is sponsored by D’Addario Strings.

Caroline Shaw is a musician who moves among roles, genres, and mediums, trying to imagine a world of sound that has never been heard before but has always existed. She is the youngest recipient of the Pulitzer Prize in Music for Partita for 8 Voices (Roomful of Teeth), and she works often in collaboration with others, as producer, composer, violinist, and vocalist. 2022 will see the release of work with Rosalía (on upcoming album MOTOMAMI), the score to Josephine Decker’s film The Sky Is Everywhere (A24/Apple), the premiere of Justin Peck’s Partita with NY City Ballet, the premiere of the new stage work LIFE with Gandini Juggling and the Merce Cunningham Trust, a premiere for NY Philharmonic and Roomful of Teeth, the premiere Wu Tsang’s silent film Moby Dick with live score for Zurich Chamber Orchestra co-composed with Andrew Yee, a second album with Attacca Quartet called The Evergreen (Nonesuch), the premiere of Helen Simoneau’s Delicate Power, tours of Graveyards & Gardens (immersive dance theater work co-created with Vanessa Goodman), and tours with So Percussion featuring songs from Let The Soil Play Its Simple Part (Nonesuch), amid occasional chamber music appearances (Chamber Music Society of Minnesota, Caramoor Festival, La Jolla Music Society). Caroline has written over 100 works in the last decade, for Anne Sofie von Otter, Davóne Tines, Yo Yo Ma, Renée Fleming, Dawn Upshaw, LA Phil, Philharmonia Baroque, Seattle Symphony, Cincinnati Symphony, Aizuri Quartet, The Crossing, Dover Quartet, Calidore Quartet, Brooklyn Rider, Miro Quartet, I Giardini, Ars Nova Copenhagen, Ariadne Greif, Brooklyn Youth Chorus, Britt Festival, Vail Dance Festival, and many others. She has produced for Kanye West, Rosalía, Woodkid, and Nas. Her work as vocalist or composer has appeared in several films, tv series, and podcasts including The Humans, Bombshell, Yellowjackets, Maid, Dark, Beyonce’s Homecoming, jeen-yuhs: a Kanye Trilogy, Dolly Parton’s America, and More Perfect.

In 2019 she released the album Orange, a free-ranging collection of chamber music pieces performed by Attacca Quartet, one of America's most in-demand young string ensembles. In 2020, the album won the Grammy for Best Chamber Music/Small Ensemble Performance. At WoCo Fest 2022, Attacca will perform music from Orange and Shaw will be featured as a singer with the quartet on new collaborative works.

'Caroline Shaw's Orange is gorgeous in so many ways...it hits you everywhere, all at once.' —BBC

Among Alexandra's awards are recognitions from American Composers Forum, ASCAP, Maryland State Arts Council, The Netherland-America Foundation, and the Smithsonian Institution. She has held residencies at the Atlantic Center for the Arts, Harvestworks, Liz Lerman Dance Exchange, The MacDowell Colony, and the Institut Universitari de l'Audiovisual in Barcelona, Spain. Her music is recorded on the Innova, Ars Harmonica, and Naxos labels.

In addition to her work as a composer, Gardner is active as an educator and consultant. She helps people from 13 to 103 explore and create music, giving masterclasses and workshops, as well as mentoring and coaching composers, and facilitating dialog and discussion related to artistic career development and the nature of creativity.