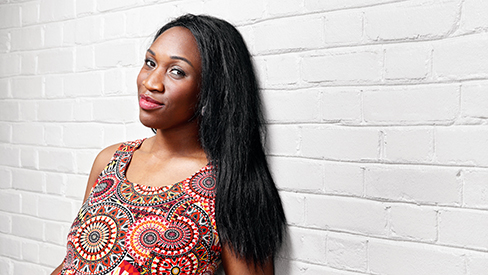 Procedures and tips for a comfortable visit.

Ines Nassara was born and raised singing in Maryland. Investing in the natural talent she had cultivated throughout her childhood, she continued formally studying classical and jazz voice at Towson University while performing in regional theatre performances in the D.C. Metro area at such venues as Signature Theatre and Ford’s Theatre. Since her Helen Hayes Award-winning start in D.C., along with local radio success of her singer-songwriter projects in Baltimore, Ines has begun establishing herself in New York City. She and her beautiful vocals are recognizable from appearances such as singing backup for Cynthia Erivo on The Today Show. She has most recently released her debut solo single “Working On It” at the beginning of 2022. A multitalented vocalist, Ines skillfully engages audiences with heartfelt renditions of classics and originals alike.

This free concert at Good Hope Neighborhood Recreation Center is part of Bloom by Strathmore, which strives to create community and expand access to the arts. View upcoming Bloom concerts.

Strathmore Artist in Residence Class of 2017

Inès Nassara was a Maryland girl singing throughout her childhood — even during the track meets, basketball games and tennis practices. Once her parents caught on to the fact that she dreamt of being a pop icon and not a mediocre athlete, she then started to invest in singing and dance more seriously. She sang throughout grade school and decided to continue singing through university studying classical and jazz voice along with a Sociology/Anthropology major at Towson University. While attending Towson she would take spring semesters off to do regional shows in DC at Keegan Theatre, Signature Theatre, Ford's Theatre to name a few.

Inès is a Helen Hayes award winning actor who got her start in the thriving theatre community of DC and is now making her mark in New York City. After her first full year living in NYC she sang backup for AJ Mitchell for the VMA’s. She soon sang backup for Cynthia Erivo on The Today Show promoting her Emmy Nomination for Harriet. Inès Nassara can be heard as the vocalist for Kate Spade’s Summer Campaign Launch singing Judy Garland’s “Get Happy”. Nassara was using New York City as a platform for music and continues to write, sing and collaborate. With that being said, she has been successfully working her way back into the theatre world in New York City and is very excited to see what is to come!

Nassara is a musician, singer-songwriter, theatre actor, session singer and producer who happens to still be obsessed with tennis. She is in a female singer-songwriter duo called HEROINE. Their music is available on all streaming platforms. Her college duo called Lush Life had successful radio play in Baltimore, MD. You can find their music on bandcamp. Ines will be releasing her solo debut single “Working On It’ at the start of 2022! Right before the release, Inès will be in a musical in DC — stay tuned for that announcement!