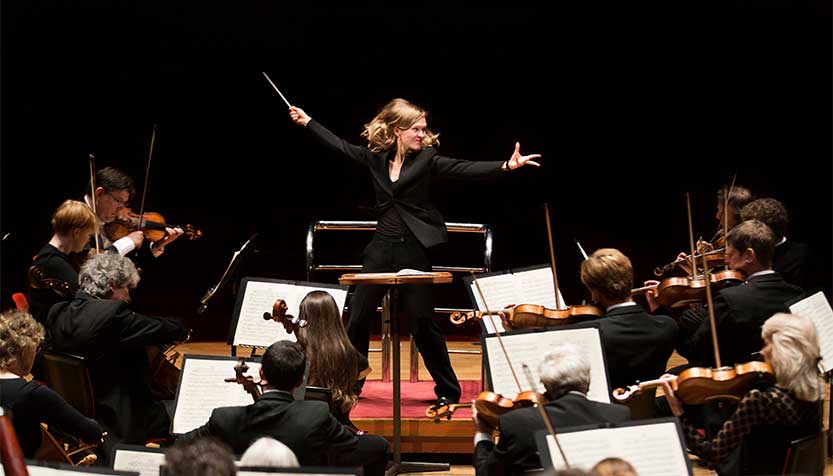 Britain’s City of Birmingham Symphony Orchestra and their acclaimed music director, Mirga Gražinytė-Tyla, make their first Washington Performing Arts appearance in more than 20 years in this fascinating program featuring the D.C. premiere of contemporary British composer Thomas Adès’s The Exterminating Angel Symphony, inspired by the classic 1962 surrealist film by Luis Buñuel. Given its world premiere by the CBSO in their home venue last year, Adès’s symphony is an adaptation of his opera of the same name, which Britain’s The Guardian hailed as “a turning point for Adès and, it felt, for opera itself,” adding, “It’s as if all music is buoyantly alive and coexisting… from Wagner to Mussorgsky, Bartók, Nielsen, Ravel, Shostakovich, and Nancarrow.”

Complementing this daring new work are two favorites of the repertoire: Debussy’s La Mer and Elgar’s Cello Concerto, the latter featuring the world-renowned young English soloist Sheku Kanneh-Mason. Catapulted to fame by his performance in the globally televised 2018 wedding of the Duke and Duchess of Sussex, Kanneh-Mason has gone on to release multiple recordings on Decca Records and to perform both solo and with prestigious symphony orchestras in the world’s premier venues. A recipient of the British chivalric honor of M.B.E., Kanneh-Mason also garnered the 2020 Royal Philharmonic Society’s Young Artists’ Award.

This event is not presented by Strathmore