What the Water Gives Us 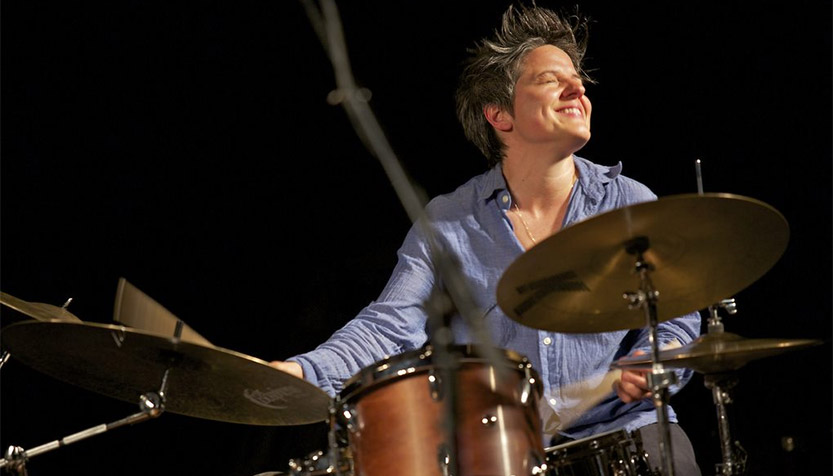 What the Water Gives Us

What happens when we open our eyes to the ecology that is all around us? Composer and drummer Allison Miller contemplates this question with her 75-minute jazz suite, In Our Veins: Rivers and Social Change. This compelling piece is accompanied by improvisational cinematography by Todd Winkler and tap dance by Claudia Rahardjanoto. Miller draws inspiration from five major American rivers—the James, Delaware, Potomac, Hudson, and Susquehanna—to subtly call the audience to notice the bodies of water they see every day.

TRANSLATING THE MUSIC OF THE RIVER

Throughout Miller’s career, she has experimented with different ways to pull influences from the natural world into her playing. In observing rivers closely, Miller found patterns and qualities that she incorporated into her work. “[My band and I] hung out on the banks of the Susquehanna River. I hunched down and watched the flow of the river, and felt that, on the sides, the water was flowing faster, and in the middle, it’s flowing slower.” She found that although the percussive nature of drums and the fluid motion of a river may seem to be at odds, she was able to pull stylistic and rhythmic   influence from the flow of the water. She also noticed that the unpredictability of rivers mimics improvisational jazz. Miller draws from the push-and-pull of the river currents for purposeful irregularity in her jazz rhythms.

Commissioned by the Mid-Atlantic Arts Foundation, In Our Veins explores more than just the beauty that our rivers hold; it also examines themes of conservation and the relationship between rivers and our own lives. “There is so much life that is happening under the water and just outside of the water, and we need to protect that,” remarks Miller. In her music, Miller not only draws from the ecology and natural elements of the rivers, but also the human intertwinement with these aquatic ecosystems. For example, one movement, “Shipyards,” juxtaposes the river with the metallic, sharp sounds of industry that brought about so much change in the landscape surrounding the rivers.

“Potomac” pays homage to the historical significance of American rivers as locations of change and progress. For this movement, Miller drew influence from the internationally broadcasted performance of opera singer Marian Anderson at the Lincoln Memorial that occurred under the Roosevelt administration. Ultimately, the piece highlights the inextricable relationship between humans, politics, and our waterways. “I think [In Our Veins] does open up people’s minds,” reflects Miller. “I don’t think you could see the piece and not, the next morning, notice all of your waterways as you go to work, and feel closer to nature.”

In her process of creating In Our Veins, Miller began with just a musical piece. However, she felt compelled to build the work out in other dimensions. “I had the aural motion,” she notes, “but I wanted visual motion. I wanted this music to feel cinematic.” So, Miller collaborated with video designer Winkler and tap dancer Rahardjanoto to turn her music into a multimedia production with many interwoven movements. Each of the artists fit perfectly into the improvisational spirit of the piece.

Miller said she firmly believes that music and dance are meant to be together and that the spirit of jazz lies in movement. Between the rhythmic elements inherent in tap and her dynamic movements, Rahardjanoto serves as a bridge between the aural and visual impacts of the piece. Rahardjanoto is both a dancer and a musician, blending into the performance as an additional member of the band. At the same time, Winkler uses what Miller calls “a treasure chest of visual components.” Also a musician, he improvises along with the band to project visuals of the rivers along with a live feed of Rahardjanoto. What results is a balanced, multimedia experience that unifies the senses and fully immerses the audience into the wonders of these great American waterways.

This program is part of a multi-year examination of the environment through artistic expression and is made possible, in part, through the generous support of Kathleen Knepper.